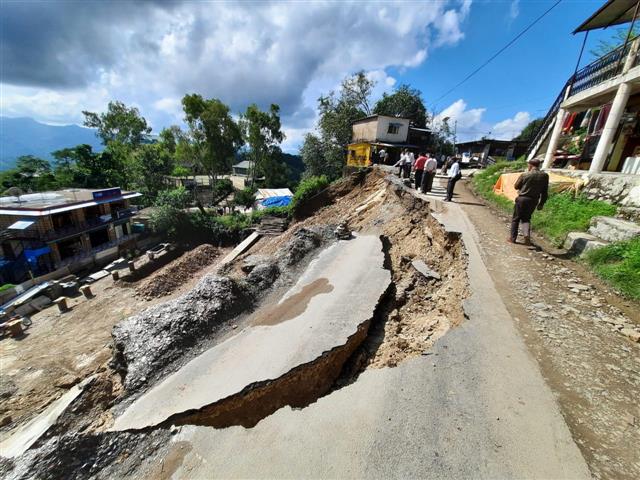 Vehicular site visitors was diverted by hyperlink roads after the Ramshehar-Kunihar-Sayri-Shimla highway caved in at Sayri in Kandaghat sub-division on Friday night following the excavation undertaken at its base.

Incessant rain within the space trigerred the incident as a sizebale portion of the highway eroded and cracks appeared on its floor.

Buses plying on the highway have been diverted by the Paoghati-Shal Chanog-Mamligh route whereas smaller autos have been directed to take different hyperlink roads.

Commuters from so far as Nalagarh sub-division use this route to succeed in Shimla moreover these from Arki in Solan district. Additionally it is utilized by college students to succeed in their academic institutes.

Solely a slender strip of the highway remained intact whereas its main portion eroded quickly after a heavy bathe.

Kandaghat SDM Vikas Sood mentioned vehicular site visitors had been diverted by the hyperlink roads and there was no site visitors disruption.

He mentioned the naib tehsildar would go to the spot to take inventory of the state of affairs and the workers of the Public Works Division had been directed to make sure speedy restoration of the highway.